Spots of Light: To be a Woman in the Holocaust

During the Holocaust, women were faced with horrific dilemmas. At the same time, they continued to strive to care for their children and those more vulnerable than them, and to preserve tradition and faith, participated in the resistance movement and in helping those in need, longed for love and friendship, sought solace in artistic expression , by nurturing their femininity, however, they sought to retain at least some humanity.

Before World War II, Jewish women, like most women, lived in a predominantly conservative and patriarchal society, so even during the Holocaust (1933–1945) they were generally not involved in running Jewish communities. Instead, they had to take the lead in the family and ensure its survival in all possible circumstances, which included both providing food at home and ensuring a minimum level of family activity regardless of the difficult situation in which they found themselves. The identification of women with children, which originated from the environment and also from women themselves, became a motivating force for the preservation of life, and consequently sent women and children together into destruction. Women who nevertheless survived ghettos, deportations and destructive persecution, and were finally interned in concentration camps as free labor, bravely faced death there, trying to make sense of every extra moment of their lives and then, when deprived for all elements of individualism, family and culture, to regain at least some of their psychological identity.

The exhibition, which tells their stories, was prepared by the Yad Vashem Memorial Center, and the Slovenian translation was provided by the Center of Jewish Cultural Heritage Synagogue Maribor.

The exhibition will be displayed at 2 different locations: 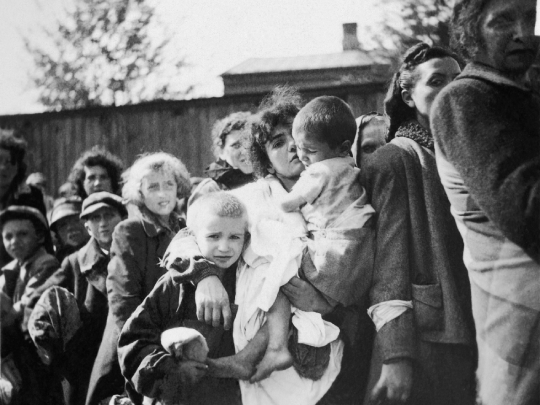 Women and children during the deportation of Jews from Szydłowiec and the surrounding area in Poland to the Treblinka extermination camp, 23rd of September 1942 (from Yad Vashem collections, Jerusalem)

Forward to "“Here Is Where Death Worked Itself to Death…”: the Slovenian victims of Auschwitz"
Back to "Stone Tears: Remembrance and Learning about the Holocaust and Genocide of the Roma"
Tweet