Slovenian victims of Auschwitz in Celje

In the lobby of the Museum of Recent History Celje, a new guest exhibition “Here Is Where Death Worked Itself To Death…”: Slovenian Victims of Auschwitz is on display from 7th of June 2022.

Students of the First Gymnasium in Celje took part in the cultural program. After greetings and speeches, the exhibition was presented by the author Boris Hajdinjak, director of the Synagogue Maribor.

The Center of Jewish Cultural Heritage Synagogue Maribor prepared the exhibition in 2020 on the occasion of the 75th anniversary of the liberation of Auschwitz as part of the Shoah – We Remember 2020 project, and the Museum of Recent History Celje is hosting it as part of the commemoration of the eightieth anniversary of the most massive deportations of Slovenes to the German concentration camp Auschwitz.

The documentary exhibition tells the story of 2,300 people from Slovenia who were taken to Auschwitz. Most of them were Slovenes, but among those deported were Jews, Roma and even a member of Jehovah’s Witnesses. Many did not return from there.

The exhibition is on display until 25th of September 2022. 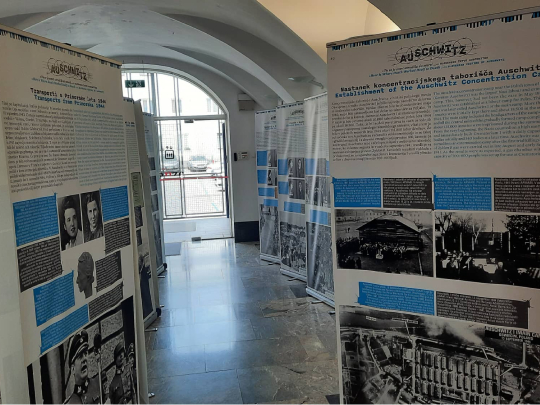